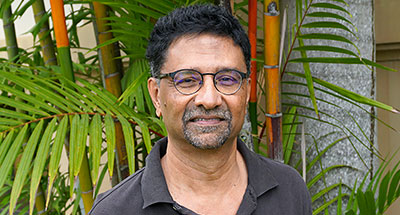 I grew up in an India where movies still began with a Films Division documentary heavy with the theme of development and ended with the national anthem. My high school finals in Madras coincided with the defeat of Mrs. Gandhi's Congress party in the parliamentary elections of 1977 and the resounding rejection of the Emergency. That experience probably awakened an interest in politics and contemporary affairs that has endured. I enjoy reading widely, with a special affinity for South Asian writing in English. I am a life member of the world's largest club of the perennially disappointed — the Indian cricket fan — and firmly believe that behind every sub-continental academic lies a failed cricketer. I consider myself very fortunate to get to live in Hawaiʻi and to have the colleagues I do.

I work in the areas of international relations, postcolonial studies, and political economy with a focus on India/ South Asia. I am especially interested in how the project of nation-building in postcolonial South Asia has evinced ethnic, regional and other resistances even as it has failed to deliver on development and dignity to the majority of its people. The second strand of my research is on the discipline of International Relations, specifically on its Eurocentric epistemology and its obliviousness to matters of race, colonialism, and inequality on a global scale. I am currently at work on a book that examines the changing biopolitics of citizenship in India since Independence, and I am keeping a wary and increasingly worried eye on the rising tide of Hindu fundamentalism in the country.

In recent years, dissatisfied with the rather limited circulation of academic books and articles, I have taken to writing for newspapers, news magazines, websites, and blogs. For nearly three years, I wrote a regular column on cricket for ESPN and have regularly published pieces on politics, contemporary affairs, and public culture in The Hindu, Economic and Political Weekly, The Wire, India Today, and other publications, mainly in India.