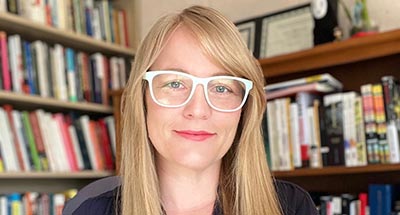 I am an Associate Professor in the Department of Political Science at the University of Hawaiʻi at Mānoa, with affiliations in the Department of Women, Gender and Sexuality Studies, the Hawaiʻi Research Center for Futures Studies, and the International Cultural Studies Program. My research examines the circulatory violence of global infrastructure and contemporary forms of data capture through questions of design, affect and aesthetics, and how we can engage abolition as an organizing ethic for a politics of response. I am the recipient of the Fulbright Scholar Award in the Middle East and North Africa Regional Research Program, and have done fieldwork in the United Arab Emirates, Qatar and Lebanon. I am also part of the Arab Council for the Social Sciences' Working Group on Critical Security Studies in the Arab Region and the Security in Context (SiC) research and pedagogy initiative, where I lead the ‘Endemic Infrastructures’ research cluster. My work has been published or is forthcoming in Security Dialogue, Critical Studies on Security, the European Journal of International Relations, Review of International Studies, International Studies Review, Contemporary Political Theory, and Globalizations. I am also co-Editor-in-Chief of the journal International Political Sociology.

My first book, Intimate Capture: Security, Desire and the Coloniality of Computation (under contract with Duke UP) looks at how control is expressed and constituted in visual, sensorial and infrastructural fields of experience produced through novel forms of data-driven security practices centers questions of coloniality and intimacy as preceding these interventions in ways that reproduce historical relations of sexualized and racialized vulnerability and the determination of who or what is a threat.  The scene setting for this inquiry is the amorphous shift from what was previously called the ‘War on Terror,’ to the multi-scalar matrices of population targeting and new forms of data capture and analytics that produce the ‘Middle East’ as something technological, aesthetic and libidinal rather than geographic, discrete, or cultural, and where the conditions of technological emergence are bent toward the dream of total environmental management through total environmental awareness. Intimate Capture takes a planetary view of these global mutations in security and surveillance practices produced in and through connective computational cartographies beyond the putative boundaries of the region, and toward questions concerning the emergence of new architectures of scientific expertise, global racisms, and new modes of perception and experience (re)produced through the creation of data that are simultaneously made a form of currency, a capacity for advocacy, and an indispensable resource for enduring regimes of control, exploitation, and dispossession.

My second major research project considers the kinds of futures being envisioned by catastrophe agents and architectures, which through a deluge of proposals, consultancies, services, and technologies advance a version of prototyping as a form of governance where ‘crisis’ is framed as something virtuous, a moral good, or a state of being to pursue rather than lament or hedge against. As part of this research, I have been developing a census map of forms of disruptive innovation, future-proofing, and apocalypse adaptation, exploring the new terms of art on offer, and how and why particular projects and locations become beta-tests for technology companies and government institutions focused on global catastrophe intervention in a post-apocalyptic state of embrace. Beyond any singular business and marketing strategy or technology, this menagerie of state agencies, architectural and design firms, and tech companies reflect collective atmospheres of preemptive de-stability, which position all forms of matter and contingency as having a specific kind of value tied to chaos. I am interested in how prototyping as a mode of governance emerges around these future imaginaries of apocalypse, prompting us to reflect on the consequences of investing in a world premised on an ethos of erasure.