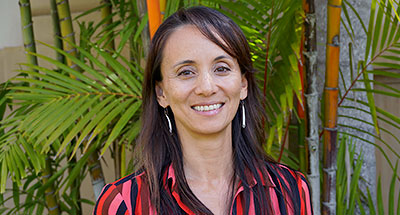 Regents’ Medal for Excellence in Teaching (2019)

He Kanaka Maoli Hawaiʻi au. ʻO Oʻahu kuʻu one hānau. My interest in the political stems from my earliest days, as a keiki born to young activists who were also UH undergraduates. My parents raised me around student movements and exposed me to many ways Hawaiʻi communities were organizing against evictions, environmental degradation, and economic injustice in the 1970s and 80s. As a UH undergraduate myself in the 1990s, I was surrounded by teachers and fellow students participating in the Hawaiian sovereignty movement. From this movement, I have learned that the most valuable places to invest our time and energy are into education and into the ʻāina. One of my primary goals is to nurture students who are critical thinkers and doers, equipped to stand up for what they believe in.

I have long been interested in the ways Indigenous people theorize and practice sovereignty. My previous research projects have involved documenting, analyzing, and proliferating the ways people are transforming imperial and settler colonial relations through Indigenous political values and ʻāina-based initiatives. This includes books and articles on Hawaiian social movements, Indigenous resurgence, and Indigenous futures. My recent book, Nā Wāhine Koa: Hawaiian Women for Sovereignty and Demilitarization (2019) is a collaboration with four activist elders who helped catalyze Hawaiian movements of the late 20th century. I am currently working on an intellectual biography of Dr. Haunani-Kay Trask. These two projects represent my increasing focus on mana wahine theory and Indigenous feminisms.

I am committed to improving public education in Hawaiʻi. A co-founder of Hālau Kū Māna public charter school, I continue to support K-12 education by helping train teachers and emergent leaders working at various Hawaiian-focused schools. I serve on the non-profit boards of Kānehūnāmoku Voyaging Academy on Oʻahu and the Hui o Kuapā fishpond restoration project on Molokaʻi. Both are at the cutting edge of what it means to do ʻāina-based education in Hawaiʻi. I led the creation of the Movement-Building for Ea curriculum for community organizers. I serve on the editorial boards for various journals, and I volunteer as a co-editor of the Indigenous Pacifics series under UH Press. From 2016-2019, I served on the elected council of the Native American Studies and Indigenous Studies Association.